» Events » Pills, Powder and Smoke, in collaboration with the Canberra Drug Policy Series

Pills, Powder and Smoke, in collaboration with the Canberra Drug Policy Series 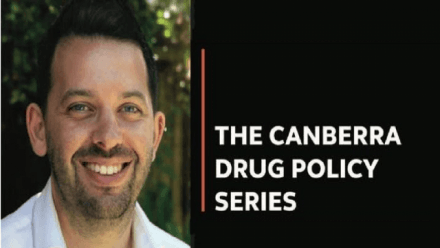 Where: The Shine Dome, Acton ACT

Come to hear from Antony Loewenstein, the best-selling investigative journalist who pulls back the curtain on the global war on drugs.

Travelling through Honduras, the Philippines, Guinea-Bissau, the UK, the US and Australia, Loewenstein uncovers the secrets of the drug war - why it’s so hard to end? And who is really profiting from it?

Loewenstein reports on the frontlines across the globe, from the streets of King’s Cross to the killing fields of Central America to major cocaine transit routes in West Africa. How has the war on drugs has become the most deadly war in modern times?

Loewenstein will read from his new book Pills, Powder and Smoke: Inside the Bloody War on Drugs. Discussants will include ANU experts interviewed by Loewenstein in his Australian chapter Professor Des Manderson and Dr David Caldicott, with Dr Anna Olsen. There will also be an opportunity for questions and answers from the audience.

The Minister for Corrections and Justice Health, Mr Shane Rattenbury MLA will formally do the Canberra launch of the book, which will be followed by book signing.

This special Canberra Drug Policy Series event is brought to you by ATODA, Uniting, the ANU School of Sociology and the ANU Centre for Social Research and Methods.

Antony Loewenstein is a Jerusalem-based Australian journalist who has written for the New York Times, Guardian, Washington Post, Nation, Huffington Post, Haaretz, BBC and many others. He is the author of Disaster Capitalism: Making a Killing Out of Catastrophe; the writer/co-producer of the associated documentary, Disaster Capitalism; and the co-director of an Al-Jazeera English film on the opioid drug Tramadol.

Praise for Pills, Powder and Smoke:

“Antony Loewenstein is an amazing journalist and this is an amazing book. Anyone who cares about the war on drugs - one of the biggest catastrophes in the world - should read this superb book right away.”

“Loewenstein’s book is meticulous and forensic, and also impassioned and urgent. What stands out is the clarity of his thinking and the rigour of his arguments. He has an historian’s grasp of the big picture and a storyteller's skill for getting us to walk in the other's shoes. The vast scope of his thinking, travel and research is evident on every page, as is his clear-headed compassion. This book is vital and I couldn't put it down.”

– Christos Tsiolkas, award-winning author of The Slap and Barracuda

“Many people assume that as the war on drugs has failed and because a few countries have liberated cannabis as a recreational drug as well as a medicine, the “drug problem” is solved. This new book powerfully demolishes any such complacency that might have developed in the west. Drug wars represent a major, ongoing world-wide disaster. This book is a must-read for anyone pursuing a rational policy debate about drugs.”