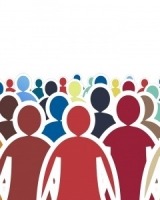 Alongside their level of economic development, countries are often defined by their population size. Australia, with a population of around 25 million, was the 54th largest country by population in 2018 and around the upper-middle part of the distribution of countries.1

Countries grow through a combination of an excess of births over deaths and an excess of immigrants over emigrants. Unlike many other developed countries, Australia has experienced a relatively rapid growth over the last decade or so. This has mainly been driven by a high rate of net migration.

The attitudes of Australians towards population growth is constantly changing. In the 28th ANUPoll, a representative sample of Australians show that more than two-thirds of adults do not think that Australia needs more people, a dramatic increase since a similar question was asked in 2010.

The things people take into account with regards to population growth are quite diverse and also appear to be changing. Most people are supportive of cultural diversity. But, crowding and housing affordability have become key issues. Australians also do not want population growth to come at the expense of Australia’s natural environment.

The findings presented in this report contribute nuance to an area in which views and attitudes can often be quite heated. The ANUpoll series, conducted by the ANU Centre for Social Research and Methods and the Social Research Centre, is designed to inform public and policy debate, as well as to assist scholarly research. It is an important contribution that ANU makes to public debate about the key social issues facing Australia and the type of country in which we want to live.

ANUpoll is conducted for The Australian National University (ANU) by the Social Research Centre, an ANU Enterprise business. The poll surveys a national random sample of the adult population (using the ‘Life in Australia’ panel), and is conducted via the Internet (88 per cent of respondents) and phone (12 per cent of respondents). The use of this mixed-mode frame is to ensure coverage of households without Internet access.

In this poll, 2,167 people were interviewed between the 19th of November and the 3rd of December, 2018. Among individuals who received the survey (ie members of the ‘Life in Australia’ panel), a completion rate of 77 per cent was achieved. Taking into account the recruitment rate to the panel, the cumulative response rate is calculated as 9 per cent. The results have been weighted to represent the national population. The poll’s margin of error is ± 2.5 per cent.

ANUPoll data is available from the Australian Data Archive.