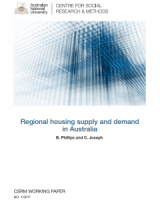 In this paper we develop a comprehensive measure of the gap between housing supply and demand at a regional level in Australia. We take into account a range of complicating factors such as changing demographics, building types and the increase in unoccopied dwellings at the regional level.

Previous research efforts in Australia focus on national estimates of the housing ‘gap’ or shortage but here we recognise that housing markets tend to be regional and that house price movements and affordability are likely to be as influenced by local demand and supply conditions as by broad national conditions.

Between the years 2001 and 2017, we estimate the Australian housing market experienced an oversupply of 164,000 dwellings. However, there are significant regional differences with some regions experiencing significant undersupply while others have significant housing surpluses.

Nationally, we do find periods of significant undersuppy, particularly between 2007 and 2014 but for other periods beyond 2001 we find oversupply more than compensated.

The majority of Australia’s housing surplus is situated in the inner-city areas of its major capitals, with Inner Brisbane, Melbourne and Sydney all oversupplied due to recent strong growth in unit developments. Many regional centres, particularly those in mining-sensitive areas such as North Queensland and Western Australia, also retain housing surpluses.

Many regions in the middle and outer rings of our major capital cities, particuarly Sydney, face modest housing shortages.

The modelling suggests that there is some evidence, albeit relatively weak, that a housing shortage is associated with higher house price growth.

The analysis exclusively concerns the concept of underlying demand, recognising that this may not be representative of the demand for housing in a traditional economics sense. The paper also acknowledges the limitations of the analysis in terms of both its conceptual basis and the data it relies on.

This paper does not conclude that people's housing needs are being met or that what is being supplied is at an affordable price point for all families.

The lack of a housing shortage may have significant implications for housing policy in Australia and the economy more broadly. If Australia’s current record home-building levels are not balanced by a large housing shortage, then there is the risk that these current levels will reduce in the near future. Policy makers will also need to place greater emphasis on other potential drivers of house price growth and housing affordability, such as a range of demand influences.